Often, parents love the idea of buying their kids a trampoline because they know they will wear themselves out. Kids love jumping; there’s no point denying that trampolines have huge benefits for kids across the world.

Parents also know that trampolining looks like a fun activity; almost no kid can stop the itch to jump. But trampolining is sneaky: Kids get their exercise without knowing it. The best part is they think it’s fun.

It’s a given that a trampoline purchase will get your kids jumping. Today, we dig deeper and find out why jumping (exercise) is so good for your kids.

Does This Scene Look Familiar?

Yes, studies have shown that trampolining has educational benefits for kids. A child that begins jumping at an early age begins to control the movement of their bodies. Studies show that the earlier this happens in the kids, the better they perform academically.

It has do with the increase in coordination and the positive effects that have on their brain.

Self-esteem has also been shown to increase in kids that regularly jump on a trampoline. Learning to jump of the trampoline is a new skill; each new skill they learn them feel a sense of accomplishment. 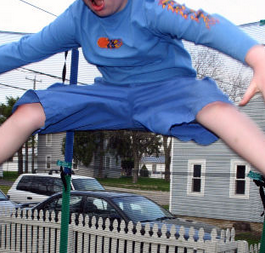 A kid that starts jumping on their trampoline at an early age will become a better athlete later in life. As mentioned, the trampoline increases coordination. It also strengthens their muscles.

They develop these early on, which is one of the main reason it will be more natural later. It’s the same concept at starting a kid in sports at an early age. The earlier they start, the more natural and easier it will be when they grow up.

Yes, trampolining is considered an aerobic sport. Kids that rarely jump think the activity is associated with exercise. Most kids hear the word exercise and won’t give it a chance. Kids that trampoline have better heart health and are more likely to incorporate an exercise routine later in their life.

Of course, jumping on a trampoline does come with a risk. People who jump on trampolines are subject to injury. As a parent, you will need to make a cost-benefit decision.

Does the benefit of owning a trampoline out way the potential costs of injury? Remember, there are safety tips that reduce the risk of injury. You won’t eliminate the chance of injury, but it’ll go a long way in reducing it.

Have fun and be safe trampolining. Keep exercising, too!

How Much Does A Trampoline Cost?
Best Trampoline Tents
What's The Recommended Age For Trampolines?
How To Care For Your Trampoline