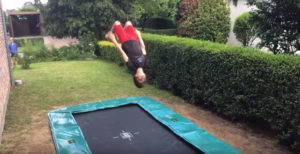 Summer’s here, and the kids are asking for a trampoline. But space is a concern, as is safety and the idea of a traditional trampoline ‘growing’ in your garden is leaving you less than enthusiastic. Have you thought about an in-ground or sunken trampoline?

An in-ground trampoline is pretty much that, a trampoline that’s in the ground as opposed to the traditional type that’s an eyesore has legs and can be moved from one part of the yard to another. There are two types of sunken trampolines, those that are flush with the ground or the kind that is (slightly) raised.

There are also different shapes available: round, rectangle or square shaped, or octagonal. The shape you decide on will be determined by space, personal preference, and your budget.

When it comes to the two types, both have their pros and cons. We personally like the in-ground option, and here’s why.

To be fair, safety is a concern whether you have a trampoline that’s above the ground or sunken. While a child can fall from a traditional trampoline, they can also get their feet and hands caught in the gap of an in-ground type. To avoid anyone hurting themselves, we would suggest having a few rules in place when jumping on the trampoline. Also, an adult should keep an eye on little ones at all times.

There’s no denying that an in-ground trampoline looks better in a landscaped garden. An above ground trampoline sticks out like a sore thumb, and it’s not as easy to disguise. With a sunken trampoline, you can design elements around it and make it a feature.

While installing an in-ground trampoline is more laborious and a little bit more expensive, it requires less maintenance in the long run. Also, there’s no exposure to the elements, so the chance of it rusting is less. If you live in a windy area, you won’t have to worry about it blowing away.

Disadvantages of an In-Ground Trampoline

There are a few disadvantages to in-ground trampolines, which you need to keep in mind. Drainage – water collecting under the trampoline can lead to a multitude of problems, which is why you need to make sure there is proper drainage.

Mobility – or rather lack thereof. Once the unit is in the ground, there’s no moving it around. Unless you plan on going through the entire process again.

Airflow – you need to make sure there is enough airflow underneath and around the trampoline so that the bounce of the mat isn’t affected.

Having said this, we don’t consider any to be dealbreakers, and there are usually ways around them.

What Does an In-Ground Trampoline Cost?

There’s no getting around the fact in-ground trampolines cost quite a bit more than the standard above-ground types. And it will take a bit more time to install. Taking into account the digging of the hole, a retaining wall as well as the trampoline itself, you’ll probably end up spending two to three times more.

How to Install an In-Ground Trampoline

Installing an in-ground trampoline isn’t as tricky as it looks. The most complicated part of the job is the planning and digging, but once that’s done, the rest can be done in a relatively short space of time.

It’s important when you’re digging the hole, to make it big enough, so there’s a gap between the retaining wall and the edge of the trampoline. Without it, there won’t be enough ventilation, and the jumping surface will be harder. You can choose to get professionals in to do it for you. This will save you time and trouble, although it’ll add to the total costs.

Things to Consider Before You Buy an In-Ground Trampoline:

Before you rush out and buy an in-ground trampoline consider the following:

There’s a wide range of in-ground trampolines available, but we recommend you go with a reputable brand. While it might seem like a good idea to save some money, quality and safety should be top of mind.

The Jump Power In-Ground trampoline is an excellent choice if you’re looking for a safe jumping option. The frame is made using 16-gauge galvanized steel, which is solid and durable, and the soft padding that covers the entire structure reduces the risk of any injuries. What we like about the Jump Power rectangular in-ground trampoline is that it comes with a safety enclosure as an added precaution.

Unlike other in-ground trampolines, the Jump Power doesn’t need a deep hole to install it.

The In-Ground Trampoline combines strength and durability and is easier than ever to install. Although it’s one of the more expensive options, it’ll last a good few years. The unique design of the trampoline addresses concerns like air flow, water collecting in the pit along with corrosion. The frame is made from 14-gauge steel and is supported by 18-gauge steel panels. As far as the trampoline goes, it has the highest spring count, and the improved airflow gives it more bounce.

The Avyna Pro-Line In-Ground trampolines are known for their safety, innovation, and quality, and while they’re not the cheapest, they’re certainly one of the best. The design doesn’t need a large area for it to be installed, and it’s literally one step from the grass. Unlike some in-ground trampolines, there are no gaps between the perimeter and the edge of the trampoline, so there’s no chance of little ones getting their hands or feet caught. Also, you’ll be pleased to know that any protruding or sharp parts are covered, the springs have plastic caps on the ends, and even the fastening hooks have a plastic layer.

Trampolines are loads of fun, plus they’re a great way to keep everyone active and get them outdoors. The traditional above-ground style isn’t always an option, with more families are buying in-ground trampolines. Take the stress out of choosing one for your family with our helpful reviews, or if we’ve left your favorite off the list let us know in the comments section.