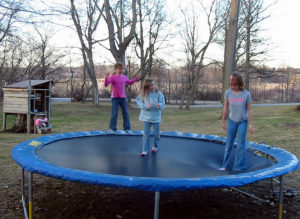 Trampolines are fun, but when you add a ball, declare a bum war, or try to crack the egg (not a real one) suddenly the fun-o-meter shoots through the roof. Trampoline games are a great way to get the whole family active, and if you don’t have the energy or inclination to join in with the games, you can always be the officiator.

You can add these games into your next party, celebrations at your local trampoline park, or just play them at home with your children. Most of them are from the playground but have been adapted to include a trampoline.

(Remember, when playing any of these games, it’s best to follow the rules to make sure no one gets hurt).

Here are 9 of the best trampoline games for everyone to play from adults to children.

Everyone loves Hot Potato, and it’s double the fun on a trampoline. The game is very straightforward – the kids are given a big, bouncy ball, which has to be passed around while everyone’s jumping. You’re not allowed to hold the “hot potato” for more than two seconds. You’re also not allowed to stop moving. When a player drops the ball, hangs on to it for too long, or stays still for too long, they’re out. The winner is the last one with the ball.

This game is recommended for ages five years and older, and you will need three players or more to play. You will also need the approved equipment of a bouncy ball to play this game.

Crack the Egg or Pop the Popcorn is another absolute favorite game among children. Not only is it heaps of fun, but it’s also hilarious for the people watching. One person sits in the middle of the trampoline, tucked up in a fetal position (to avoid any injuries, make sure the egg or the popcorn doesn’t tuck their face into their legs). Everyone else on the trampoline has to jump so that the person in the middle breaks their hold, cracks, or pop. It sounds easy enough, but as everyone jumps together and the momentum builds the poor egg flails around like a chicken with its head chopped off.

The recommended age for this game is four years of age and older, and it’s best with a minimum of three players.

Have you ever heard of Bum Wars? It’s a classic game that you’ve got to try. The idea behind the game is that the last person standing is the winner, but it’s what you do in between that counts. Players jump a few times to warm up and then when everyone’s ready, they drop onto their bums, and then jump back up to land on their feet. If they double bounce on their feet or on their bums, they’re out. Bum Wars is a lot more fun if there’s an adult or two in the mix because the weight difference makes it more challenging. When playing with an adult, the children will bounce higher because the adult will make a more significant bounce.

The recommended age is five years of age and older, and it’s best with a minimum of two players. The game is also great to be played with an adult.

Bounce Battle is a bouncy battle of fun. This is perfect for two players, and while it seems simple, it’s all about patience, coordination, and endurance. Players face each other and do seat drops, but when they bounce back up, they have to launch themselves with their entire body, so they don’t stop bouncing. The first one to slip loses; the first one to stop bouncing loses. Trust us, it sounds a lot easier than what it is.

This game is recommended for ages six and over and is perfect for two to three players.

Who doesn’t love Simon Says? This is a great trampoline game for smaller kids and won’t only keep everyone fit and healthy, it’ll also have everyone in stitches, especially if you act silly. Just like the classic game, one person is Simon, and they give out a whole lot of commands. Everyone needs to do what Simon says, but only if he’s said it. If you’re playing with younger children, let them get the hang of it and then speed up with the commands.

It is recommended for ages three and over and is ideal for three players or more. You do not need any equipment to play this game.

No favorite games list is complete without Dodge Ball. Everyone knows how much fun it is, and adding a trampoline takes it to another level. It’s good for balance, spatial recognition, hand, and eye coordination, and to stay in the game, you need to be able to aim, jump, throw, and dodge oncoming balls. To get started, divide players into two teams and have them line up opposite each other on either side of the trampoline. Give everyone a softball (preferably foam) and let the dodging and throwing begin. When you get hit, you’re out, but you can catch the ball and throw it at an opponent. The last person on the trampoline is the winner.

Recommended for ages 5+ (depending on their skill level) and it’s suitable for as four players or more (preferably more.) You will need to get a four-square or some sort of bouncy ball.

Poison Ball is a lot less dangerous than what it sounds like and is an excellent way to keep everyone moving. All you do is put a couple of softballs, or stuffed animals into the middle of the trampoline with the kids standing in a circle. When you give the instruction for everyone to start jumping, the balls or animals will start moving around too. The catch is that they’re “poisonous” and if they touch someone that person has to sit out of the game until another player “revives” them with a high-five or a tap on the back.

Recommended for ages 4+ (if they understand the concept) and is good for three players or more. you can use stuffed animals or balls to play this game.

This is a great game for younger children to play with their parents or with an older sibling. Come onto the trampoline with your child and some bubbles. Start blowing bubbles and have your child try to pop as many as you can. this will let your child have so much fun and they can even try blowing bubbles themselves.

This game is meant for a young child around the ages of two to five. This can be played with someone who knows how to blow bubbles.

Kids have a blast on a trampoline, regardless, but these trampoline games are a great way to encourage kids to interact, socialize, and be active. Older kids enjoy letting off steam, while the young at heart benefit from the exercise, the laughs, and the interaction. Trampolines are also very good for children with Sensory Processing Disorders, and they’re a smart way to incorporate sensory-integration-therapy-activities into their day.

Trampoline Accessories
The Ultimate Round Trampoline Buyers' Guide
How To Setup A Trampoline – Tips & Tricks
What's The Best Backyard Trampoline? – Reviews and Ratings